Thank you all for joining us for the 2022 Coeur d'Alene Antique & Classic Boat Festival on beautiful Lake Coeur d'Alene! We look forward to seeing you out on The Boardwalk next summer for our 2023 Festival - set to take place on August 12th & 13th! More details coming soon. Cheers!

Featured Boats In This Year's Show

Scroll over the photo to read a short bio about the boat! Chris Craft developed and manufactured the “finned” continentals between 1957 and 1959.  The series included 185 boats.  This was a very small production number and consequently is a relatively rare model.

The finned continental was truly a transitional boat.  Its details were taken from the 1957 Lincoln automobile. The boat is powered by a Chris Craft 283 cc V-8 engine and cruises at 38 MPH. This incredible one-of-a-kind wood sailboat was designed specifically for Lake Coeur d’Alene and built by Coeur Custom. The entire yacht is sailed single-handedly by her owner or the captain, using an array of sophisticated hydraulic controls. She is 60 feet long with an 87-foot-tall mast, displaces 42,000 pounds, and has 30 coats of mirror-smooth finish. This floating work of art took 30,000 man-hours to complete. She combines traditional and exotic materials from around the globe. The Sizzler combines the best of technology with pure sailing ability. Greatness is something never seen before. It is an idea, come boldly to life. Greatness is the new Steinway 340 HT, designed by master craftsman Jim Brown and crafted by Coeur Custom. Spanning 34 feet in length, a 9’ 6” beam, 430 HP and a double-planked hull. This distinguished boat is built with sapele wood and features an endless list of incredible features and amenities. This spectacular beauty redefines boating forever. 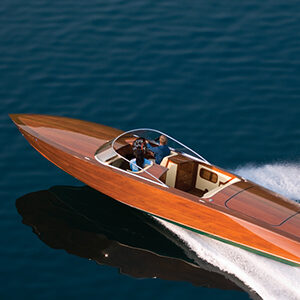 Designed for the ultimate in cruising comfort and style, this gentleman’s runabout is cold molded from African mahogany and western red cedar and powered by twin 400-horsepower MerCruiser engines. The boat was designed by Jerry Gilbreath, and built by the talented wood boat craftsmen at Coeur Custom to an extremely high degree of tolerances, fit and finish. Owned by Murray Danzig of Coeur d’Alene, Idaho. 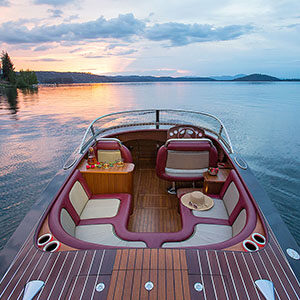 This beauty is FOR SALE for only $219,995! The design is a collaboration between Jerry Gilbreath on the hull and Jim Brown, master builder at Coeur Custom, on the features. She was built in 2012 of sapele mahogany. The boat is 29 feet long, powered by Mercury 8.2 Mag HO 430 hp and Bravo 3 outdrive. She has a bow thruster, underwater lighting, and custom stainless cutwater and accents. Jennifer ll is a N. Idaho boat shipped from the factory to Spokane in Dec. 1937. We acquired the boat in 1989 and keep her on Hayden Lake. This 1938 Chris-Craft 17' Deluxe Runabout reflects classic mid-1930's boat design, with elegance of scale, proportion, and line. Jennifer ll is virtually all original, and has received top national and regional awards since her complete restoration in 2008. 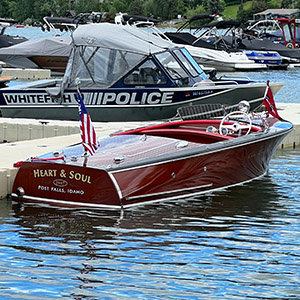 Heart & Soul is a post war 1947 deluxe, double cockpit forward 17’ runabout. It’s powered by a 95 hp KLC Hercules straight flathead 6 cylinder engine with a average speed of 35 mph. The boat was delivered February 13, 1947 to Brewerton, New York. The cost of the boat in 1947 was $1,640 as compared to the cost of a new home at $10,000. There were 1,880 hulls produced. The boat moved from New York to Florida then to Wenatchee, WA where the owner found her in complete disrepair. It took 18 months to rebuild Heart & Soul. At the 2021 ACBS International show in Coeur d’Alene Idaho, Heart & Soul was awarded the gold award in its class. 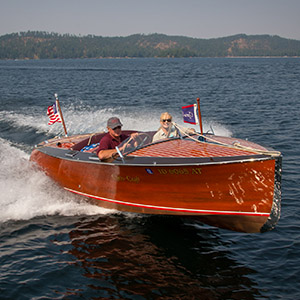 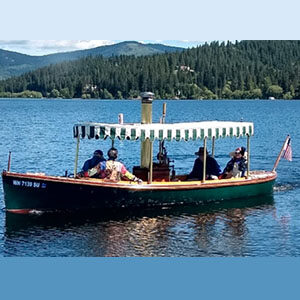 Owned by Joe and Betty Maridon of Spokane WA. It was built by Beckmann, Ltd. in Slocum, RI in 1993, it is 22 ft long and weighs 2800 lbs. It is powered by a Vee compound steam engine built by Semple with cylinder diameters of 3" and 5" with a 4-inch stroke. It has a keel type condenser, so exhaust steam is condensed and pumped back into the boiler. It is set up to operate in salt water. The boiler is a water tube type, operation pressure 150 psi and is fired with diesel fuel. The propeller is a three blade, 18-inch dia. with a 24-inch pitch. We bought the boat in April of 2020. It had not run for years and took extensive work to get it looking good and running well. 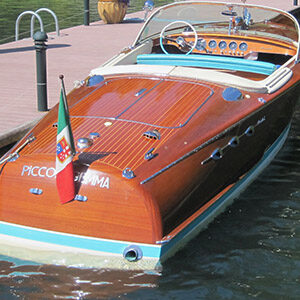 Cheryl and her late husband, Ron Nichols, have had several Rivas – it started with an Aquarama Special, then Aquarama No. 4 and now this Ariston. Just before Ron and Cheryl finished building their home on Sanders Beach, they reached out to Herb Hall of Sierra Boat Company Lake Tahoe. Herb had sold them their other Rivas and numerous other antique wood boats over the years. They wanted a boat they could tow to all the wonderful lakes in the Northwest. Ron and Cheryl made plans to attend the annual Riva Days 2002 to be held in Berlin, Germany that year. From Berlin, the boat was trucked to Rotterdam, placed in a container and shipped to Wilmington, Delaware where she entered the United States. Sometime later, she arrived in Coeur d’Alene where she’s been ever since. Ron and Cheryl have taken their Gem to Kootenay Lake in British Columbia, Lake Washington, Lake Tahoe, Pend Oreille, Priest Lake, and all over Lake Coeur d’Alene and the Coeur d’Alene River.

Baby is a kit boat manufactured by Mold-Craft, Inc.The Model is "Skeeto" it is a fishing craft - an ideal boat for children and a deluxe dinghy for large cruisers. Originally built by Robert Marshall who used it as a dinghy on the Krisabal II motor launch. Baby has been restored to look like a mini Chris Craft with it's 12 hp Briggs and Straton Inboard engine and features that a full size boat would have.The 7 1/2 ft long Dinghy has its own custom built trailer by Tow Rite and a wet exhaust system. 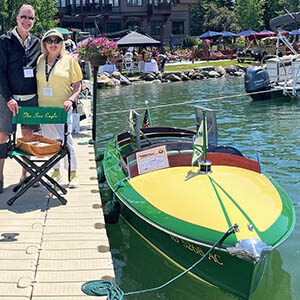 The 1932 Mullins Sea Eagle Deluxe debuted the year after the Standard Sea Eagle was introduced. Made of galvanized steel the craft is equipped with 5 air chambers and the reason why the manufacturer claimed, “Mullin Boats Can’t Sink.” With a 45 HP Lycoming Engine and longitudinal corrugations built into the hull this boat was one of the fastest 16-foot runabouts of its time. 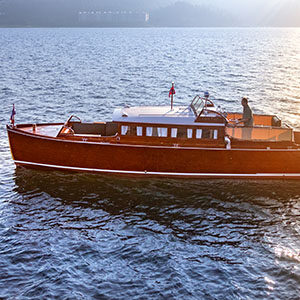 Formerly known as “Althea”, Lucille was first launched in 1929 for her owner, businessman William F. Ladd of New York City. The top of the line in the Chris-Craft fleet, she earned the nickname Queen of the Fleet. Today, more than ever, that honor holds true. She has won the highest awards in five major Pacific Northwest wood boat shows. She was Chris-Craft’s first-ever Commuter Cruiser model, and Mr. Ladd used her to commute from his summer home in Long Island to his office in Manhattan. She is 38 feet long, with seating for twelve passengers in the forward cockpit, bridge deck and aft cockpit. Most of her vintage features are restored intact. Today, that makes her an incredible boat for entertaining in the spirit and style of the Roaring 20s. 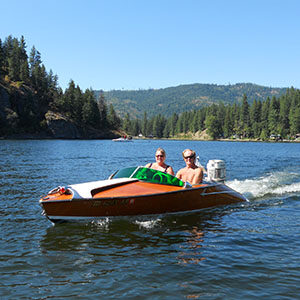 Life O’Riley is a 14 foot Aristocraft built in Atlanta, GA in 1956. Found at a yard sale at Twin Lakes and restored in a year, she spends most of her time cruising Twin Lakes with Darryl and Kerri. 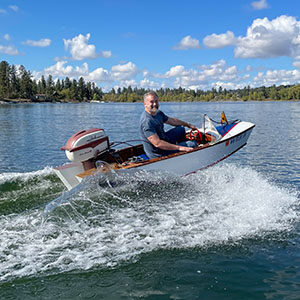 As a father-son project, this Roberts Craft “SKIMMER” kit was purchased in 1956 by John “Johnny” Isaac who, in 1957 with his son Melvin, built the Sic-M as a family ski boat. The Sic-M was “reinforced” by Johnny to allow the SKIMMER, which was a “pram” style boat designed for a 7.5 hp motor maximum, to use a 25 hp Johnson and later a 40 hp Evinrude, allowing 2 adults to ski behind the Sic-M. 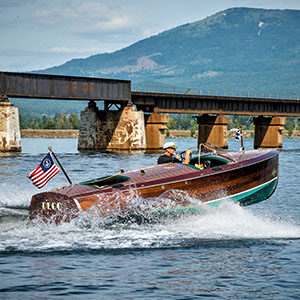 Deco is a 19’ 1930 Dee-Wite split cockpit runabout powered by a 115 hp 6-cylinder, Gray Marine Phantom Dee-Wite’s were manufactured in Detriot MI by the Dwight Lumber Company. Dwight was one of the main suppliers of lumber to Chris Craft and Century, which were near Dwight. In 1929 Dwight made the decision to enter the booming pleasure craft industry. The new boat division was named “Dee-Wite” a cleaver variation on “Dwight” Dee-Wites were known for their “modern” sleek design and were solidly constructed. Unfortunately, the Great Depression of the 1930’s closed the doors on the parent company and with it-the boat division in 1936. Today Dee-Wites are in the “extremely rare” category, with only a handful known to exist. “Deco” was named in tribute to the “Art Deco” style popular in the 1920’s and 30’s

The one, the only, the Pisque Cutter. Owned by Syd Young out of Post Falls, Idaho. 375 HP. 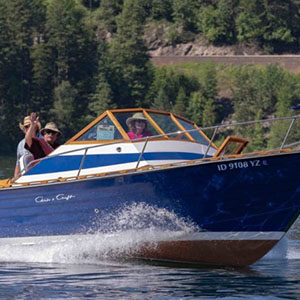 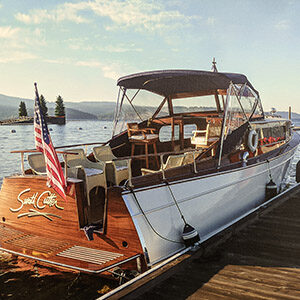 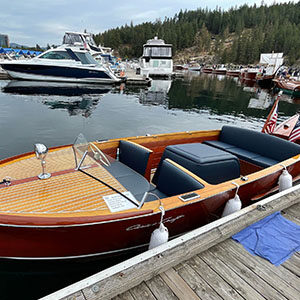 Originally purchased by Robert Frost, and delivered to Portsmouth, NH in 1948, this 18’ Chris Craft Deluxe Sportsman spent most of its life in New Hampshire, and Massachusetts.

Some time in the early 1990’s, it was donated to the International Yacht Restoration School in Newport, RI where it was one of the school’s early restoration projects. Upon completion, it was acquired by a Captain on Cape Cod, and remained with him until I acquired it and brought her to Wisconsin in 2007.

In the Spring of 2013, some of the fastenings between the bottom and transom failed, resulting in nearly sinking her. That began a 9 year process of trying to figure out how bad it was, and could I save her myself. In 2019, we moved to Spokane, and I trailed her out. The 2021 ACBS show provided the deadline necessary to tackle the task. With the help of Jim Brown and the fantastic team at Coeur Custom, she underwent her second restoration, finishing just in time for the ACBS in Coeur d’Alene in September of 2021. She nearly didn’t make it to this show however, because she threw a rod in mid-July. With the assistance of Syd Young, a replacement engine was located and installed for her to be here today.

Check out a recap from the 2021 International Coeur d'Alene Antique & Classic Boat Festival that took place in Coeur d'Alene, Idaho:

Event Brought To You By 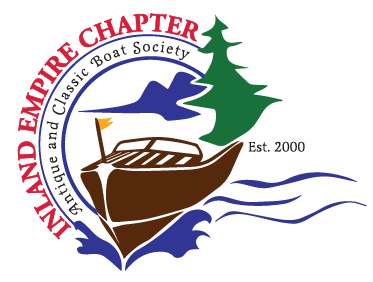 View our current Coeur Custom models that can be completely customized to your desires or use them as inspiration for something completely new and original.