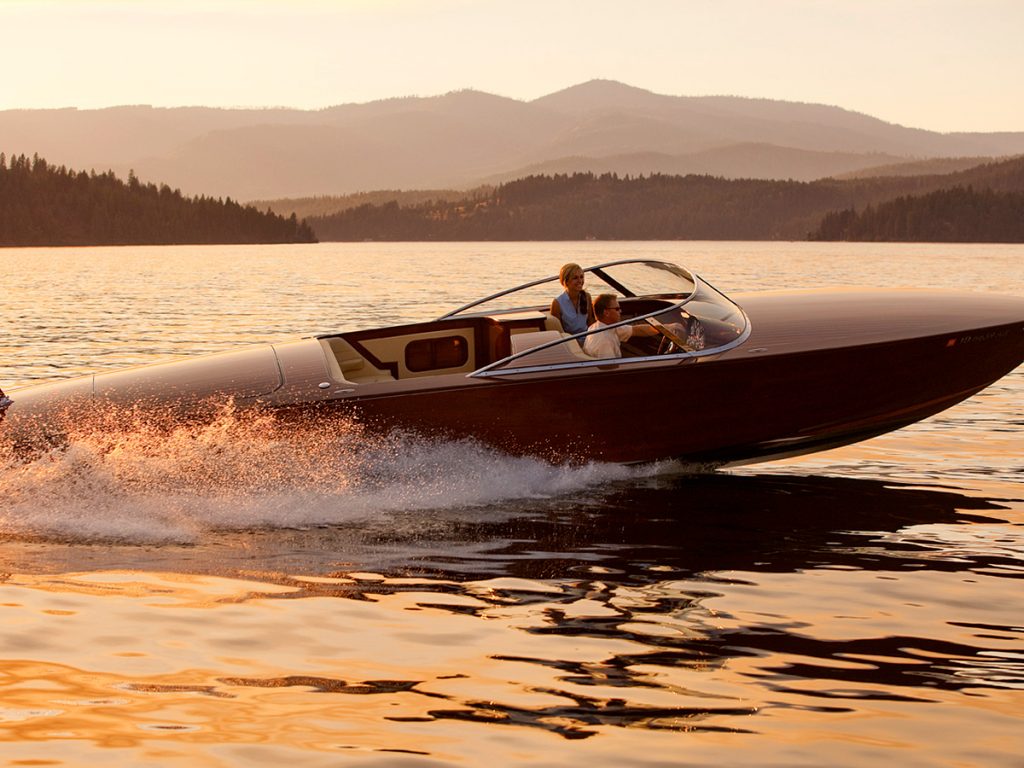 Jefe, a 34-foot Coeur d’Alene Custom luxury runabout built by The Resort Boat Shop, won with a perfect first place score in its class at the 36th International ACBS Boat Show held at Lake Geneva, Wisconsin, with 160 boats in attendance.

Owners Donna & Jerry Gilbreath of Coeur d’Alene were thrilled when the boat won top honor out of 66 boats in the contemporary classic division, for boats built since 1968. The award was based on a number of strict criteria, including workmanship, design, fit and finish.

“We’re proud we could represent the city of Coeur d’Alene, The Resort Boat Shop and Hagadone Marine Group, and most importantly, the individuals that worked so hard on our boat,” Jerry Gilbreath said. “Without their devotion we would not have the unbelievable degree of perfection that was achieved.’

The boat was made from African mahogany and Western red cedar by a team of expert wood boat craftsmen. She is beautifully finished both inside and out with 29 coats of epoxy and varnish, and shined with a five-stage buffing process.

“People just kept coming back and looking at the boat again like they couldn’t believe it,” he said.

Designed by Gilbreath, a former champion offshore powerboat racer, Jefe is built for smooth, quiet cruising and a wind-free cockpit, and uniquely designed so the bow never rises up into the drivers field of vision. The extraordinary level of craftsmanship caught the eye of one show attendee in particular.

“We were told the boat earned a 100 out of a possible 100,” Gilbreath said. “I had one retired boat show judge come up to me and say, ‘There is no such thing as a perfect score.’ I told him to go and look and he spent an hour trying to find a flaw. He came back and told me he couldn’t find a single one.”

To get there and back, the Gilbreaths drover their beloved boat 4,000 miles round trip on a trailer behind their Yukon Denali, with the yacht meticulously bandaged three times over in anti-chafe tape, a full towing cover and shrink wrap. They were stopped numerous times by people along the way asking about the boat. Even under the full cover, its lines drew a crowd. The extra care paid off. “She came back as perfect as ever,” Gilbreath said.

“Our congratulations to Jerry and Donna, form the entire team,” said Craid Brosenne, general manager of Hagadone Marine Group. “Jefe has won some major awards since she was launched, but this is the grandest of all.”

The boat has been featured in international publications including Robb Report, Northwest Yachting, Yachts International and CdA Magazine. She won awards at wood boat shows in Coeur d’Alene, Sandpoint, Payette Lake and Tahoe, along with top honors at the 2010 Desert Storm show on Lake Havasu.

“It was an incredible experience,” Donna Gilbreath said. “Everywhere we went, when people heard we were from Coeur d’Alene, they always told us how beautiful if is here. Now they know what kind of boats we can build, too.”