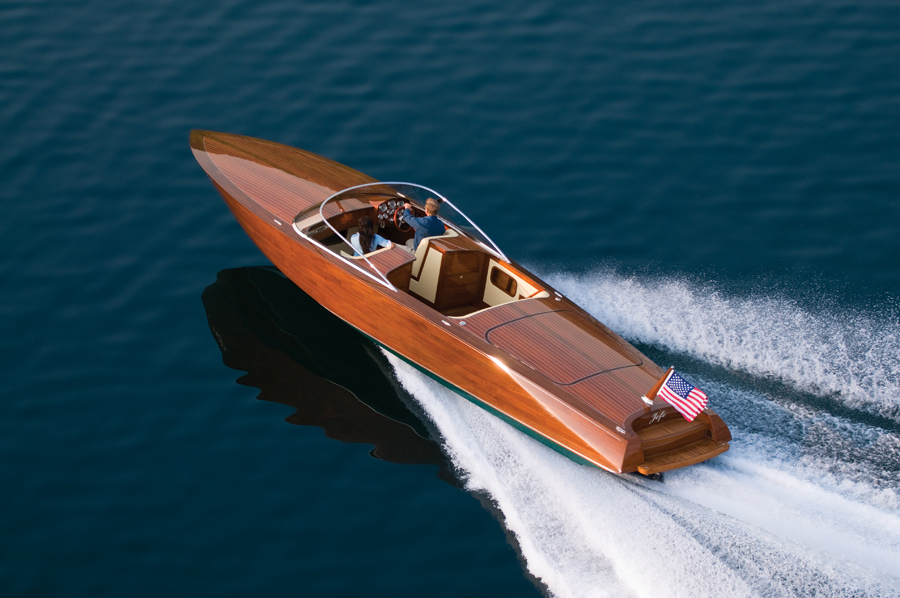 Jerry Gilbreath made a career out of designing, building, and racing speedboats that were faster than some supercars. By the time he retired from racing five years ago, the powerboat pilot had notched more than 25 speed records and nine world championships in a span of four decades. So even in retirement, Gilbreath would seem an unlikely candidate to commission a vintage-style vessel designed for casual lake cruising. But Jefe—Gilbreath’s version of a gentleman’s runabout—is less leisurely than it might first appear.

“I wanted to build a boat with today’s technology married to a mahogany, old-school look,” he says. “It’ll go 70 mph, but it’s not about 70 mph. I wanted to make something very efficient and very appealing to the eye.”

To realize this combination of muscle and mahogany, Gilbreath turned to the Resort Boat Shop in his home base of Coeur d’Alene, Idaho. The shop, which is part of the 24-year-old Hagadone Marine Group, specializes in quality restorations but has also started producing custom boats. One of those new vessels—the sleek 60-foot sailboat Sizzler that the shop built for company owner Duane Hagadone (see Robb Report, March 2009)—convinced Gilbreath to look no further than his local yard.

Gilbreath collaborated with the Resort Boat Shop on the design of Jefe, a 34-foot speedster that redefines the gentleman’s-runabout genre. Though she recalls the classic wood boats that ply the waters of resort destinations such as Lake Como in Italy, Lake Tahoe on the California–Nevada border, and the Finger Lakes in New York, Jefe is a thoroughly modern vessel. As Gilbreath notes, the boat is capable of reaching 70 mph, but she is most comfortable gliding across the surface of her home waters of Lake Coeur d’Alene at a fuel-efficient 40 mph.

The Resort Boat Shop team contributed many of Jefe’s design elements, but the runabout’s lines and hull shape are the products of Gilbreath’s extensive knowledge of powerboat performance. Jefe has a 15-degree-deadrise hull with a stepped transom and lifting strakes, and her twin 400 hp MerCruiser engines and fuel tank are positioned to achieve supreme balance. These features enhance fuel efficiency and nearly eliminate bow rise as the boat comes onto plane (which she achieves at just 10 mph). Instead of the straight shafts found on most true classics, Jefe uses trimmable MerCruiser Bravo One sterndrives. Exhaust is vented through the props to reduce noise dramatically.

In constructing Jefe, the Resort Boat Shop employed a cold-molding technique known as vacuum bagging—as opposed to traditional plank-on-frame construction—that involves laying thin strips of wood on the bias and impregnating each layer with epoxy resin. The resulting hull, which has a base of western red cedar and three layers of African mahogany, is much lighter and stronger than a standard wood hull. Thirty coats of clear finish cover Jefe, whose interior is based loosely on that of a Bentley automobile.

Like a custom-made Bentley, Jefe is one of a kind. The boat’s builder, however, is now launching a line of gentleman’s runabouts based on her design. Craig Brosenne, general manager of the Hagadone Marine Group, says the Resort Boat Shop has begun a second hull identical to Jefe’s that, like other boats in its line, will have features specified by the owners. “If a customer can dream it,” says Brosenne, “we can build it.”