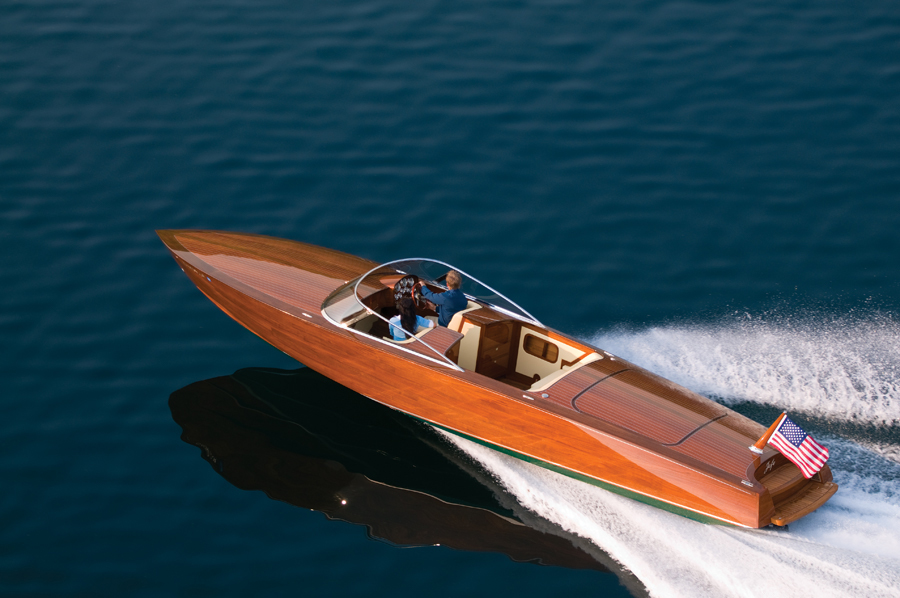 Assuming that fast boats have been an integral part of your life since you were a preteen, you might wonder what kind of boat you’d want to own when you’re an adult. If you’re like Jerry Gilbreath of Coeur d’Alene, Idaho, that answer came in the form of an incredible wooden masterpiece of design, craftsmanship, and perfection.

Even though Gilbreath spent much of his life pursuing checkered flags on the water, it isn’t that much of a surprise that he and his wife Donna decided on a classic-looking wooden boat, conjuring up their 34-foot boat, Jefe, with an assist from the talents and ingenuity of the Resort Boat Shop, a division of Hagadone Marine Group, also based in Coeur d’Alene.

If there’s one thing that has been a hallmark of Gilbreath’s career on the water, it’s been that he likes to stand out from the crowd. After all, Gilbreath’s family founded one of boating industry’s most innovative and prolific producers of high-performance marine accessories from the 1960’s, ’70s, and ’80s: Gil Marine. Not only did the company have a stellar resume that included virtually every aspect of powerboat competition from marathon endurance to ski racing to offshore, Gil Marine introduced the first successful outboard transom bracket to the marine market in the mid-1970’s. When Mercury Racing debuted its overwhelmingly successful HP500 stern drive package, every engine had a set of Gil water-cooled exhaust manifolds and stainless-steel tailpipes on it.

Meanwhile, Gilbreath was busy in his own right developing, engineering, consulting, and rigging many of the most successful offshore race boats the sport has ever seen. His resume includes teams such as Popeye’s, Alcone Motorsports, and Fountain Powerboats. Just to seal the deal, Gilbreath more often than not occupied the throttleman’s seat, helping high-profile race teams on both the east and west coasts win offshore titles in the sport.

So what have the Gilbreaths done with their latest venture? First you need to understand that they could have built just about any boat, engine, and propulsion combination imaginable. The project could have been a Skater, an MTI, a Fountain, an Eliminator, a Hallett, a Nor-Tech, or an Outer-Limits, but those weren’t different enough. The mystery boat could have been powered by two, three, or even four Mercury Racing 1350s with Number Six drives, but it wasn’t.

Instead, Jerry and Donna stuck close to home in Idaho, commissioning the build of hull Number One in a new line of Coeur d’Alene Custom Wood Boats from the Resort Boat Shop. In doing so they join a long list of other custom builds that include everything from sailboats to tugs to elegant wooden runabouts.

“I had this idea in my head for a very long time,” Gilbreath said recently. “I’ve spent years building, engineering, and rigging incredible pieces of fiberglass designed to go fast across the water, but I’ve never done anything in wood. I’ve always admired beautiful Chris Crafts and Rivas for their timeless beauty and craftsmanship. This just seemed like the perfect moment to put this project into motion and make it a reality.

“When I saw the 60-foot custom wood sailboat, Sizzler, that the Resort Boat Shop built for its owner, Duane Hagadone, that was the clincher. It is a magnificent boat. I thought, if they could build a sailboat like that, they could certainly build the ‘gentleman’s runabout’ that I had been thinking about for years.”

Jefe was completed and launched in June 2009. It is 34-foot long, with a 102-inch beam and a 15-degree deadrise non-stepped V-bottom. Power is provided by a pair of 400hp MerCruiser 383ciengines and Bravo One stern drives. Custom Marine’s custom polished stainless-steel exhaust and tailpipes dress the engine in appropriate style. A power hatch makes it easy for Gilbreath to show off the engines and an automatic fire suppression system protects the compartment.

The boat is constructed from a combination of traditional materials and new technologies. The hull is fabricated with cold-molded construction using epoxy resins (see side bar for more details). Jefe’s base is Western Red Cedar, topped with three layers of African mahogany laid on the bias. This process provides versatility of design, coupled with exceedingly high material strengths. Both the exterior and interior of Jefe are finished with 15 meticulously applied coats of Awlgrip 545 epoxy, four cots of Epifanes PP varnish, and 10 coats of clear Alexseal plus hours of wet sanding an a five-stage buffing process. The result is a shimmering finish in which you can see yourself as clearly as a mirror.

“Working with Jerry and Donna has been quite rewarding,” said Hagadone Marine Group’s manager, Craig Brosenne. “The are exacting owners with a clear vision for excellence, and that’s where our team of boat builders excel.”

Although at first glance it might appear that the boat is the result of some magnificent restoration project, it’s not. “The only vintage part of the boat is the trees that were grown to make it,” Gilbreath said.

In actuality, the entire boat is custom and unique, from the CNC-machined throttle handles to the cabinetry to the hull shape. The dashboard includes high-performance Livorsi gauges, Latham Marine throttles/shifters and a tilting Latham stainless steel helm capped off with a banjo-style steering wheel. The interior is finished in top-end ultra-leather materials with mahogany and teakwood accents including teak decking underfoot. Numerous built-on amenities include a mirrored beverage bar and a removable cocktail table. When you return to the boat after a nice dinner, courtesy lights illuminate the cockpit and engine compartment.

On the exterior, the hull-to-deck joint is capped with a stainless-steel rail and the bow eye and stern cleats are stainless steel as well. Custom stainless steel side vents for the engine compartment and an integrated wooded swim platform finish the stern of the boat in fine style.

Admittedly not intended for ultimate top speed, Jefe still exceeds 65 mps at wide-open throttle. Billet trim tabs enhance the boat’s versatility to help settle the ride in a variety of conditions. Thanks to the unique shape of the wraparound, stainless steel framed windshield, there is little or no air movement to disturb the passengers seated in the open cockpit. Perhaps paying tribute to his racing days, Gilbreath had the boat rigged with keyless ignition. And for easy navigation, Jefe has a GPS/chart-plotter. To protect passengers from the sun’s rays, the boat has a bimini top and to ensure that shimmering wood finish retains its luster, it has a Sunbrella mooring cover and a cockpit cover.

Although the boat was not built for competition, Jerry and Donna have not been able to resist the temptation to take Jefe to several of the finer classic boat regattas around the country, riding on a custom trailer, of course. So far, in judged competition, Jefe has been an unchallenged blue-ribbon winner, including top honors in its category at the 2010 Desert Storm Poker Run in Lake Havasu City, Arizona, where some of the most exquisite high-performance boats from around the nation gather.

“I’ve had this boat in my thoughts for about the last 20 years,” Gilbreath said. “The people at the Resort Boat Shop literally built my dreams.”

Many people have heard the term “cold molded,” but few know what it actually means. In the case of Jefe, the cold-molded process means that the boat is built almost opposite from molded-fiberglass models.

A cold-molded boat is constructed from the frames out, explained Eric O’Brien, service and business manager at the Resort Boat Yard in Coeur d’Alene, Idaho. In the case of Jefe, all the frames were formed out of 3mm-thick African mahogany that was bonded together with epoxy resin and vacuum bagging to arrive at the desired thickness for a given frame piece. On a boat of this size and style, the frames are horizontal crossmembers that span the beam of the hull approximately ever 2 ½ feet. They vary in width, going from narrow at the bow to wider at the boat’s maximum beam to thinner at the stem.

The boat is basically built upside down with the frames temporarily bonded to what’s called a strong back after a jig is drawn out indicating the position of each frame member. Once the frames are in place, the chines are cut in at each end. These need to be identical to ensure that the boat will be dimensionally correct. “You’re trying to lay a long straight line through a curved plane of all the frames,” O’Brien said. To get that straight, it takes somebody who knows what they’re doing.”

Once all the frames are properly positioned and the chines are cut out, the boat’s keel gets cut in and laminated in place, again using epoxy resin and vacuum bagging to properly distribute the adhesive for maximum strength without having excessive resin buildup. When the resin cures, the keel supports the frames and the strong back is removed.

Now it’s time for the first layer of the hull skin to be bonded to the hull with stainless-steel screws. The Resort Boat Yard chose Alaskan Red Cedar in 2-by-1-inch panels to skin the hull because it’s soft enough that the craftsmen could sand it to the precise shape they wanted for the hull bottom. “That’s where you really spend the time to make the boats fair,” O’Brien explained. He estimated that there were approximately 150 man-hours in the sanding of the cedar alone.

Once the hull shape is arrived at, three layers of mahogany are used to finish the bottom. The first of three layers of 3mm mahogany is vacuum bagged and epoxied into position at a 45-degree angle to the keel. Once the first treatment cures, the second layer goes in using the same bonding technique at the opposite 45-degree angle. The last layer consists of handpicked, book-matched pieces of 3mm mahogany running bow to stern and polished to the boat’s shimmering outer appearance.

Stringers are formed out of mahogany and bonded in place depending on the type of engines chose and their position. All subfloors are Okoume plywood while the decking for Jefe is real teak. The cabinetry and seat bases aboard the boat were built individually, while the dash was built out of mahogany and then finished with a zebra wood veneer for a unique look.

Jefe’s deck is put together similarly and bonds to the hull in a joint that is clamped, glued, and screwed together for a waterproof seal. And that’s the cold-hard story of how this boat was built.- Eric Colby