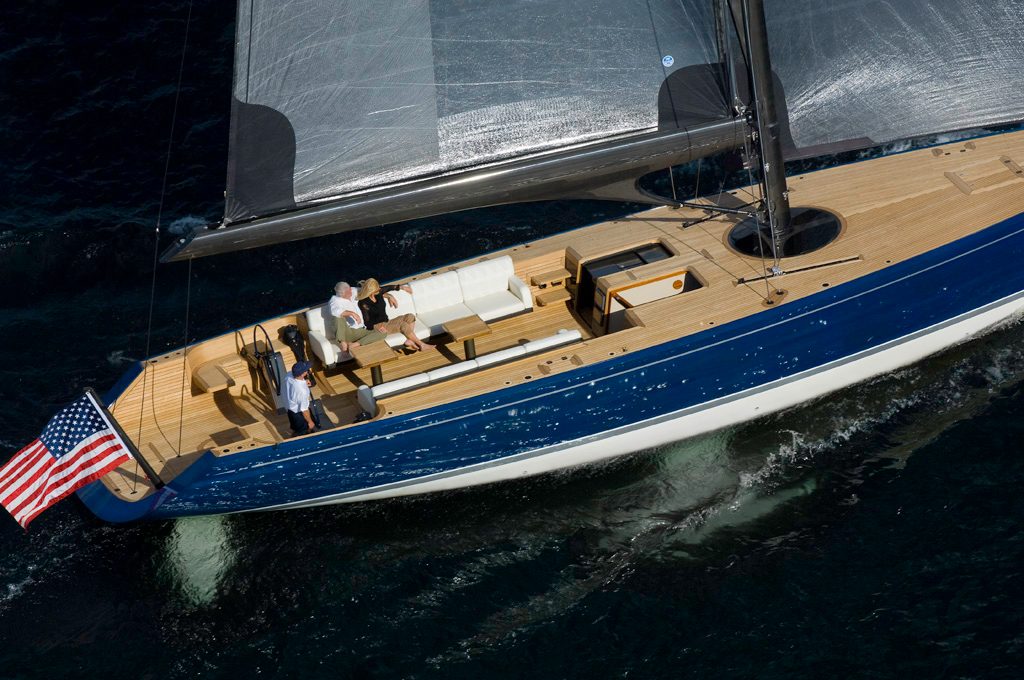 In a distant corner of North America, in Kootenai County, Idaho, is a clear glacial lake, wedged between mountain ranges of ponderosa pine and the western sky. Lake Coeur d’Alene, at 700m elevation, is rimmed by massive trees and rock. It’s hundreds of miles from the Pacific. And its home to one of the most sophisticated performance daysailers ever built. Just launched, this 60ft flush-deck speedster – all cold-moulded wood and carbon fibre construction, the best hardware, right, sails and custom engineering – is a one-off special from designer Tony Castro.

Caged into the lake’s 30 miles by three miles, Sizzler tacks from shore to shore like a corralled thoroughbred. But this is where she was built and where she will stay. Hidden from the world.

Duane Hagadone intended Sizzler for this remote waterway. At 76 he is tall, leathery, bright-eyed. From his birth on this lakeshore to his development of a empire of publishing and real estate, he looms large over this western region. “All four of my grandparents grew up on this lake,” he said. “We had no money and lived in a log cabin on the western shore, but we boated all the time, spending every minute of every summer on the water. After years of sailing small boats on the lake I had a dream to build a boat like Sizzler.”

Hagadone had the means and palatial homes around the world. But he loved boats, including a custom powerboat offshore built by Don Aronow that he had on the lake and a couple of mega yachts, a 120-footer and 205ft Oceanco, Lady Lola, with a helicopter on the stern, a fleet of shadow boats and a decade of ocean travels. “I love sailing, but I do not like all the time required to get the boat ready, so I had been thinking of a design I could sail quietly on the lake by myself, completely automatic, something stylish with a lot of sizzle,” Hagadone recalled.

The owner of Oceanco, Richard Hein put Hagadone in touch with Tony Castro and they discussed a stable, simple lake boat. Yet Sizzler, with her flush-deck and Wally-like profile, has features never seen on a daysailer or lake boat. Ever the pioneer Hagadone decided not only to commission a sophisticated daysailer but to build it himself in a lakeside workshop previously used for his lake fleet wood custom launches. Hagadone pulled together a team from Stan-Craft Boats and other small builders which had a long history of fine motorboats to start work on the design.

“To make it easier we chose the material his own people had experience with – wood,” Castro said. They cold-moulded an inside layer of western red cedar with three cross-layers of mahogany, using epoxy and carbon fibre reinforcements throughout the boat to keep the structure light (42,000lbs) while retaining traditional elements of a teak deck and cockpit. New Zealand’s High Modulus was draughted to specify a complex laminate schedule, then Giorgio Cecchinato, and America’s Cup design engineer, flew in from Italy to assist with carbon fibre technology. The boat is a web of complex hydraulics, so Cariboni provided expertise on developing the systems.

The design features a flush deck, plumb bow and open reverse transom with an overhang and a lighting keel with a huge bulb and high-aspect ratio rudder. Southern Spars produced a carbon fibre 90ft rig and an integral wishbone vang for a futuristic profile.

Designed as a light wind lake boat, Sizzler was built for single-handed, push-button operation and fun., The boat, which took 30,000 man hours over 13 months to create, is unusual not only because it looks like something from the space programme on this western lake. With 5ft 9in below decks, it has virtually no headroom and no berths. Topside, its 25ft cockpit is fitted with an integral sound system and elegant custom sofas to port and starboard. In this expansive cockpit are twin centerline tables that hydraulically lift out of the deck. Just forward is a complete carbon fibre bar, with icebox and drawers filled with crystal glasses and decanters.

Hagadone’s ideas had been forged by the slush decked speedsters he had seen while cruising in Europe. When Hein and Castro visited Hagadone to suggest a true single-hander for the lake’s sheltered waters, they realized the boat would have to be a craft designed purely for exhilaration. The confines of the lake meant it would only be used for sport and entertainment rather than travel. It would have to leap to life from the gate and every particle, cure and surface had to exude style. “My family had an Ericson 36 on the lake,” Hagadone said. “I remember catching the sunset breeze each night and sailing home by moonlight, with only the sound of the wind and reflection on the water.” As the land cools the warm lake waters pull the breeze from the east each sunset; a wind as reliable as clockwork known as the Wolf Lodge Express. Hagadone preferred and heel and acceleration of Sizzler despite a fleet of sporty runabouts. Her lines were sleek – no lifelines, no hardware interrupted the sheer. And the finest suppliers worldwide were to contribute. Along with High Modulus, Cariboni, Castro, Hein, Southern Spars et al, much of the hardware was developed by Lou Varney from Cowes.

Recessed cleats with retractable mooring lines, a stern passerelle and hydraulic fittings provide push-button power, their hydraulic systems hidden below decks. No anchor, chain or windlass system is required, so Sizzler has uncorrupted decks. Bow and stern thrusters are operated by joystick – handy for lateral docking and defensive maneuvers among speedboats and teenage wakeboard drivers.

The surface looks matter too on a yacht that comes to life each sunset. The final layer of mahogany was covered by 16 coats of clear epoxy, then four layers of blue-tinted Alex Seal clear-coat, then three more layers of clear buffable Alex Seal and a final waxing.

The result is the mahogany grain is lit with a subtle blue mirrored effect from certain directions. The hull shifts from a midnight blue to a translucent light cobalt patterned with the wood grain. Good thing Sizzler will never face corrosive salt water.

Except for the all-carbon fibre head, sink and minimalist galley, and one L-shaped settee, Sizzler is all function and style below. The varnish and clear-coating epoxy reveals the honey-toned laminations of cedar and mahogany and custom metalwork that holds her together. The teak flooring looks like a classic holly inlay, but on closer inspection s inlaid with brushed steel. Detailing was the mantra – the bilge-mounted stainless tanks are polished. Sail power comes from a huge sail area by 3DL North, and includes a Kevlar code zero. A Volvo Penta auxiliary provides the mechanical power for the hydraulics at the heart of the best. They are also polished and pedestal-mounted on display like the engine of a classic car. Forward, in place of sail storage and cabins, is a showcase of hydraulic rams, batteries and pumps. A large round flush-mounted skylight circles the mast base on deck and features a carbon fiber cross-beam, allowing abundant daylight below and greater headroom in the foyer like centerpiece. It’s here the small settee might provide comfort in a sudden squall – the foul-weather locker has enough Sizzler-emblazoned gear to fit out a Volvo crew.

Normally, this is a fair-weather vehicle, however, intended only to dice it up mid-lake or transport friends to a restaurant. Seasons present another problem. Because the lake’s water level fluctuates – most dockside facilities have 8-12ft of water according to the season – the 16,000lb keel lights from 8-12ft. That said, the reality is that the boat has to be hauled ashore from autumn to spring when the lake level drops too low. It gets pretty cold, too, of course. “That Hagadone had the faith in us to build Sizzler here on the lake with local talent, motivated our crew to devote ourselves to doing our absolute best work from start finish,” project manager Craig Brosenne said. “We had the craftsman and were guided by an international team of specialists in carbon fiber construction, rig technology, systems, all the various facets of the build who came and helped at different stages. But Hagadone enjoyed the process and takes great pride that his own regional crew could build it to the standards of the finest European builds.”

It may seem a shame that a pure-bred speedster like Sizzler will not have a bigger stage. There is no competition to gauge its success – nothing comes close on the lake. Not so, believes captain David Kilmer. He often sails alone to iron out any kinks and says the solitary sails are their own reward. We join him as Hagadone pulls the boat from the dock. As the Wolf Lodge Express builds, they point into the sunset, the hull sparkling blue in the light, Hardly a word is spoken as Hagadone tacks across the brief stretch once again. His private jet handy, he could be anywhere on any boat, at any time. But he milks the soft breeze here. In the shadow of his family’s log cabin, he teases the wheel and Sizzler thrills on a dash from rail to rail.