At first light on flat water, a boat flies into the sunrise, chased by its darker reflection. Light dazzles the hull and the wake flies off clean and true. She splits water and sky as a bolt of destiny, a delirium of pleasure, turning the head and stirring the heart. 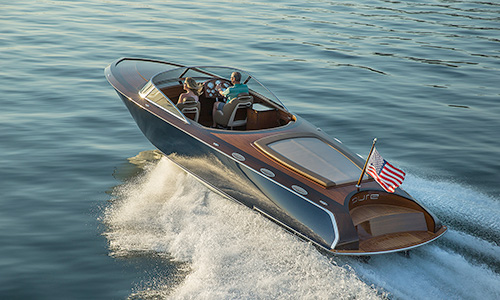 The driver pulls back on the throttles and the boat slows, a racehorse not quite ready to quit. Up close, the boat is a seductive enigma. In the lines of this modern classic runabout is the serendipitous collision of past and future. Like anything great, she started with desire, then the means and the moxie to pull off a rare object that could be equally admired 100 years from now.

In the spring of 2008, master boat builder Jim Brown took delivery of a load of wood. The pallet that arrived at his shop door in Coeur d’Alene, Idaho, was a dusty stack of milled planks. But to his eye, each piece of African mahogany and Western red cedar belonged to an intricate design in his head. They would bend to his will. When Jim looked at that load of lumber, he saw a boat.

Upriver from the boat shop, across Lake Coeur d’Alene, Jim Edwards was doing what he’d done for nearly 30 years – finishing another custom lake home. He’d been here as Coeur d’Alene was discovered, and had built homes for many of the athletes, business magnates and entertainment stars who settled on the lake or kept summer homes here. He was in the habit of visiting these waterfront home sites in his wood boat, a 38-foot sedan cruiser.

At the helm of his cruiser, he had seen a sleek mahogany arrow pass him on the water. It was Jerry Gilbreath, eight-time offshore powerboat racing championship, taking his steed Jefe out for her morning run. Jefe was the latest launch by Jim Brown’s team at Coeur Custom Wood Boats. Long, low and gleaming, she was irresistible.

So Jim the homebuilder shook hands with Jim the wood craftsman, and a new boat was born. 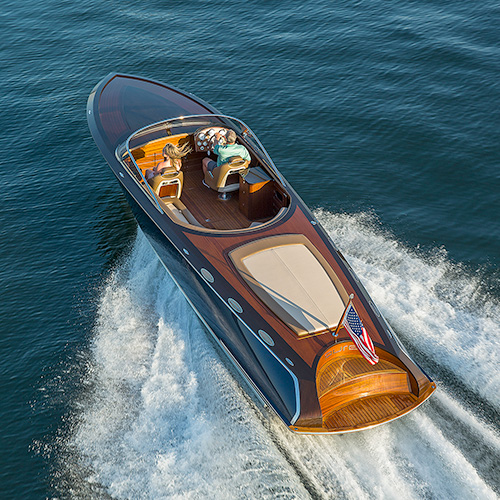 Jim Brown has the right temperament for his trade. Perfectionist isn’t a strong enough word. He is deliberate, infinitely patient and stubborn when it counts. These are all the right things when you’re at the top of your game in one of the most meticulous of all trades, a profession that shows every flaw.

“Building wood boats is a black-and-white affair. There’s nowhere to hide,” he admits. “And if we’re not getting better, we’re getting worse.”

As a young man, he was fascinated with both wood and water – and he found a career where he could combine them to great effect. His boat designs and builds have won top awards at the big shows in the West and Midwest.

“There’s nothing else like wood on water,” he says. “The chance to build a new boat that matches its owner, limited only be imagination in the early stages, is a most satisfying thing.”

Jim Edwards has a passion for unique things and for things that go fast. A former owner of 30-some restored vintage cars and hot rods, he’s traded that hobby for his latest pursuit as an amateur racecar driver. At a private motorsports track in Arizona, he can fly in to the track’s airstrip and take his pick of his fleet – a racing Scion FR-S, Spec Race Atom, Porche GT3 RS or his latest baby, a Formula Lites FL15 open wheel racer. Clearly, if he was building a boat for himself, it would have to look spectacular, and it would have to fly.

Edwards found himself in a unique position. After thousands of these conversations on the other side of the table, he was now the client. Over the years, he’d built an estimated $100 million in lake homes for a demanding set of clientele, and handled some big expectations along the way.

“You have to be able to make decisions,” he says. “The custom home clients that really get what they want, they get it, see it and make the right call. I was determined to be that kind of client on my boat.”

For the runabout he wanted, Coeur d’Alene Custom Wood Boats suggested a traditional build with modern technology – a plank-on-frame construction, cold molded with epoxy with no screws and no wood plugs to fail.

“We minimized the problem areas so strength and longevity are immense,” Brown says. “We built the frames differently by laminating them one piece at a time with cedar. They are tested to be stronger than a hand-sawn frame. I know; I broke them myself in the bench tests.” 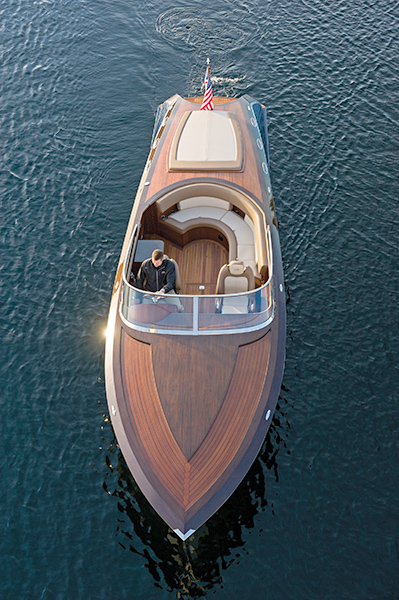 The frames make one smooth line from the sheer across the chines and keel to the other side, with no joints, gussets, screws or bolts. A continuous laminated keel and keelson runs unbroken from bow to working transom for integrity and longevity.

“We wanted a boat that stood the test of time,” Edwards says.

With these frames squatting upside down on the shop floor, Brown and his team began to lay the first planks using half-inch cedar. Then came the magic trick. The craftsmen infused the wood with epoxy and cured it inside a series of plastic wraps in the technique of vacuum bagging. Then they removed the bags and build hardware and faired the surface with great care. They repeated this three more times using mahogany. The finished thickness was 2.5 centimeters, perfectly smooth, and not a screw to be found.

Edwards enjoyed his weekly ritual of visits to the boat shop, reminiscent of working with some of the fine wood craftsmen he’d employed over the years. He and Brown worked to see how far they could push the envelope.

“We wanted to make a recessed foredeck with the lumber curved parallel to the deck sheer, giving the same effect you would see on the teak deck of a sailing yacht,” Brown says. “Curves are amazing in wood, but building them is another thing. It looked great in the plans, but could we do it? We tried steaming it, tried every other means, in the end we had to dry bend it. It worked.”

The powerplant was an all-important consideration. As a self-confessed motorhead, the owner chose twin Mercruiser 383 Ci small-block engines with a 30-inch jackshaft to Bravo I outdrives for the right weight and balance. The engine room, revealed at the touch of a button, is pure sex appeal. Chrome accents and custom polished stainless headers contrast with bright mahogany frames and the off-white satin finish of the hull’s interior.

From his adjustable custom R-5 bucket seat, Edwards would have the controls of a race machine at his fingertips: Latham shifters, Zeiger tilt helm with Grant steering wheel and Livorsi instrumentation. He would see the water panoramically through a handmade, custom-bent windshield.

The shop created a side entry door so guests could step from the dock directly onto the teak cockpit sole. They added upholstered furnishings, two-zone heating system, rear-deck sunpad and integrated swim platform.

True to his word, Edwards made decisions with agility and speed. The upholsterer dragged out five books of samples and expected hours. The owner made the call inside of five minutes. “He always asked the hard questions, but then he didn’t hesitate,” says Brown.

One of the big calls was what to do with the finish. The owner wanted blue, but also agonized over painting over the splendid wood planks perfectly aligned down her hull sides.

“Right up until the day we painted those sides, I wasn’t sure about it,” he says. “I was afraid I was making a mistake and there was no going back. Then I saw that blue hull and that white bottom paint, and I went, ‘Aahhhhhhh.’”

It is indeed a stunning combination: traditional high gloss Epifanes varnish on the brightwork, Alexseal blue and clearcoat on the topsides and white VC bottom paint.

Then it was time for the jewelry. Pure was dressed to kill in polished steel with custom air inlets, transom guard, and a lovely little bow cap and cutwater. Each letter of her name was done in rolled stainless, curved to fit the transom, and mounted with great deliberation.

“Every boat we build has its own personality,” Brown says. “Pure is definitely a she – elegant, beautiful, comfortable, classy in every respect and mirrors her owners that way. Jim Edwards had an expression time and again, saying, ‘We just nailed it.’ He really cheered us on through the process. In his vision, in not settling short, we achieved something great. All the hours, the problem solving, the sorting, the running, the cutting, fitting, cutting again… all come down to this.” 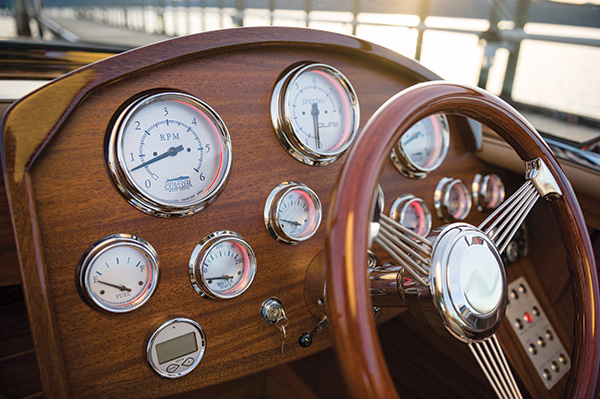 “The name is a tribute to the men who built her,” Edwards says. “Jim and his team are exceptional people with incredible talent. They created pure elegance, pure artistry, pure beauty.”

The real allure of a custom build, Edwards says, is having something nobody else does. It’s an approach Coeur d’Alene Custom Boats was founded on.

“We want these boats to be all about the owner,” says Craig Brosenne, head of Hagadone Marine. “We want our boat brand to play second fiddle. At the end of the day, we build one-of-a-kind boats that are created by the owner, for the owner, and that’s exactly what we achieved with Pure.”

“The first time I stepped into the boat, I didn’t even go anywhere,” Edwards says. “I just sat there at the dock, and looked at all the details, all that lovely woodwork around me.”

And then he took Pure for his first spin.

“I noticed the power right away,” he says. “When I punched it, I found the bow didn’t rise up like my last boat. The throttles were silky – incredible smooth acceleration. I got that racecar feeling. Then as I pushed it up to 35, 40 miles per hour, we realized we could talk. There was no wind and very little engine noise. Very nimble, but stable. It was a great pleasure building this boat from start to finish, and that ride brought it all together. That first time out, I didn’t ever want to turn around. I just kept going down the lake…”